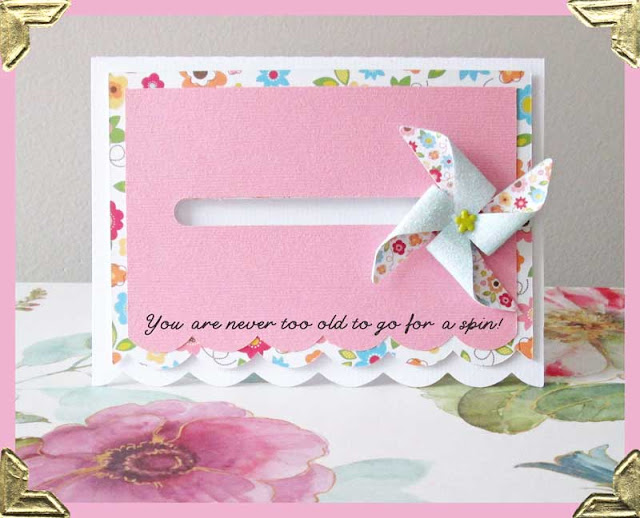 Immediately I saw a short video on line of these cards in action, I knew I had to make one. Be warned, they are quite addictive to play with! If you Google "penny spinner card" you will see they come in various shapes, but I really liked the pinwheel as it evoked happy, childhood memories. I have a friend who loves taking part in vintage car rallies, so the sentiment seemed perfect for her. The spinner card file I used is by Lori Whitlock. Instead of the pinwheel it could also look really good with a child doing a cartwheel such as using the file A hug and a heart by Samantha Walker #37787.

STEPS:
1. Open the file and ungroup the shapes. Move the pinwheel aside, and then re-group the horizontal cut with its surround, the second piece like this, and then the card shape needs grouped with its dotted fold.
2. I cut the background card on my first piece of white card stock.
3. For the larger, slotted layer and the pinwheel shape I used a background fill (Central Park flower pattern). I printed some cardstock with these and with registration marks enabled.
4. For the top slotted layer I used plain cardstock and simply cut the shape out. If you want to print a sentiment on it, enable the registration marks, type your sentiment and print a sheet from your printer. before putting it on the Silhouette mat and sending for cutting. Once done, stick the two layers with the slotted hole together, so that the holes align.
5. I wanted to introduce a bit of sparkle, so I used the double sided adhesive sheet and cut another pinwheel shape. 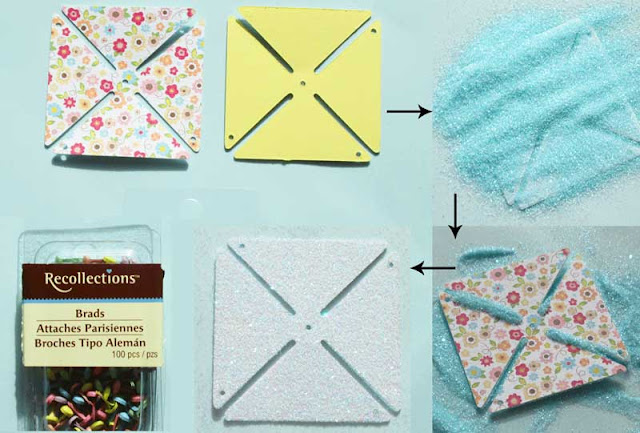 I peeled off the backing and carefully applied this to the white, unpatterned back of my pinwheel. I then peeled off the other protective backing. With adhesive side up, I liberally sprinkled on some glitter powder, and then reversed the shape, pressing it down into the mound of glitter to get even more to adhere. Fold in the pinwheel wings, rolling them over a pen, pencil or knitting needle, so that the tiny holes for the brad are on top of one another in the centre. Thread a brad through all four layers and splay out the back of the brad to fix. 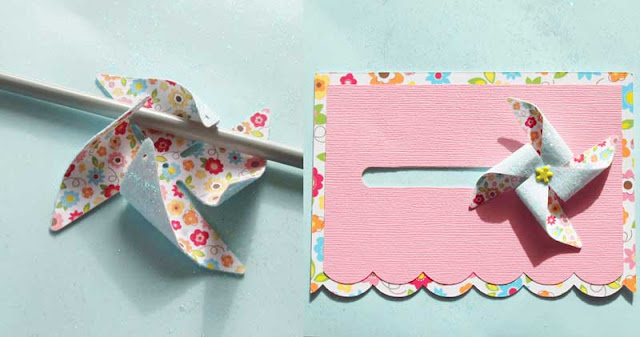 CONSTRUCTION:
6. I roughly cut a foam sticky pad into a rounded shape and stuck it onto a coin. The other side of the coin is stuck with another sticky pad onto the pinwheel. This is then introduced through the front of the double slotted layers, and the second penny can be stuck from the back of the card. Make sure it all slides freely, and rotates, by rocking it back and forth.

7. Pop more sticky pads on the back of the double slotted layers, making sure they do not impede the movement of the penny slider.
8. Fold over the main piece of card and attach the slider layers. If you didn't print or stamp on a sentiment, you can stick one to th front, but you will need to make sure it is out of the way of the travelling pinwheel. Play with the pinwheel as it will gradually move better and better as the sticky foam pad is rounded off. Well, that's my excuse!